Back to all posts

"You! (point) Me (point)! I can feel it...I can see it!  I've been working my whole life to get right 'here' (waving arms). Everything is lining up...I'm spinning, doing my yoga, haven't smoked in 3 weeks...NO negativity near me!  I've just been on the path, on the path, on the path...you'll see!! It's yours too, sister! You have so much going for you! The WORLD is going to hear my buddy, 'Heather Horton'...just you wait..."...
This annual presentation began the year 1999 by one of my closest friends, David Scholle. It was repeated, almost verbatim, for the next 15 years...and he meant it.  I mean, he MEANT it, every time. It was, indeed, always 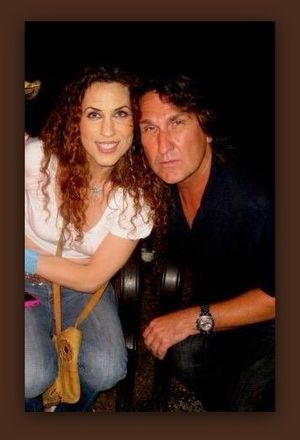 'our year'...but really 'our year' to live and learn and to eventually figure out what
the hell "our year" really was.
I met David on a recommendation for a hair colorist from a friend of mine. David wasn't any 'beauty school drop-out'. He was a rock star.  Oddly enough, that's what one of my nicknames from him was and I never liked it.  He was the real rockstar. He was written up in elite fashion magazines and did the hair of all the top models in NYC, working for Bumble and Bumble, after his training here in Chicago at Vidal Sassoon. He lived the fast life. I mean the war stories were endless and sobering, to say the least.  David came back after years of parties and knew that he needed to save himself and leave NYC, Miami...flights on the Concord...so he packed his gear and did hair for all the 'cool kids' he hung out with, here in Chicago, traveling to their homes via motorcycle...ahem, Harley Davidson at long last.
He always had THE best hair...THE best tan...THE best sunglasses...THE best clothes ("oh these? I got these on line for 25 bucks!!")...THE best taste.  I couldn't believe he wanted to be my friend because he was just sooooo cool and hip.  I was a total nerd in comparison, really, but...he loved me. He really loved me. He loved me like big brothers do.  He was so protective of me.  He hung on every note I sang and every note I played. Though he was a Smiths and techo alternative diehard, "you know what I want to hear", he would say when I'd ask over the mic..."David, what do you want to hear", just to embarrass him.  I always knew it was 'Most of All'...he would text me from wherever he was in the country when it came up on his iPod. He would spit to hear the name of any man that broke my heart and was there for me...and gave endlessly-of his time, of his dreams, of his tuna fish sandwiches ("ummmmmm, Heath...why don't you let me make the sandwiches"...mine were always too bland).
He loved a lot of people...all worthy of his love.  We didn't run in the same circles outside of "our time", but I loved hearing about his other "favs".  Dave's Favs.  He really saw the best in everyone.  As much as "the man" he was, he was so tight with his family.  I mean tight like, I was in awe of it.  He would drive down to his hometown of Lasalle/Peru in what is like a 2 hour drive (Evel Knievel would make it in half that) all the time just to mow his mom's lawn...his sister was his alter ego and twin...I call her Saint Mary...and "the kid"...his Nephew was his shadow.   I loved that David wasn't afraid of acting like a kid too...I lived for our coffee hangs at "the pretty people Starbucks" on Rush and then we would skip down the street ignoring the
stares.
I hit rock bottom (I hope) once 7 years ago.  The rug had been ripped from beneath my toes and I drove to Dave's in a daze.  He and his friend (lifer) Dan, met me at the door, led me by the arm to the crazy couch and proceeded to massage my hands and feet for quite possibly an hour...and then David spit- "I nevvvvvvverrrrrrrr liked him evvvverrrrrrrr"...
I was somehow in the position about a year later, of falling in love with Michael.  Falling in love, perhaps for the first time - in the "grown up" way. David, like everyone, thought I might be out of my mind...but he saw sooooo much of himself in Michael and vice versa, that he thought...huh...this guy deserves a chance..."cuz Heath ain't budgin'". When Michael quit drinking a year ago, David was blown away...like everyone.  He would tell me over and over again that Michael was his official role model...if HE can do it???????? "He's my HERO"!!! ...So all those years ago, I asked David if he could help me buy a perfume worthy of the sophistication that David had for style and taste...we went to Barney's.  I had never been there.  He helped me pick the perfect scent.  I felt like I was a 'cool kid'.  I felt new.  I felt...well, I felt. That was 6 years ago.  I'll be wearing that perfume to his funeral today.  Think I'm gonna miss him...and love him...forever...most of all.